HARRY POTTER AND THE PHILOSOPHER’S STONE

Harry Potter is an orphan and lives with his pathetic uncle and unbearable Dudley. Harry is mistreated and misunderstood, he feels and lonely, until one day he receives a letter that will change his life forever and leads him to discover his true identy. Harry learns that he has been accepted as a student at Hogwarts boarding school of Witchcraft and Wizardy. From that moment, the fate of Harry gives a dramatic turnaround. In this school so special, he learns spells tricks and tactics of defense against Dark Arts. He becomes the school champion of Quidditch, a sort of football that is played on broomsticks, and he gets good friend but also some fearsome enemies. But above all, he learns the secrets that allow him to fulfill his destiny. Though not apparent at first glance, Harry is an ordinary boy. He’s a magician!

They study in big magic castle and they do tricks of magic.

This is my favourite book because it is very long and the book’s author is J.K. Rowling.

My favorite book is “ALGO RARO ESTÁ PASANDO”.It tells the story of a boy who comes back to a city with their parents.

He lives in an apartment block, with a nice big garden, and a lonely elderly neighbor and apparently, something strange.

Until one day he decided to enter the house of his neighbor in secret, discovered two boxes talking alone.

The old man tells him the secret and that’s when the child begins to get along with him.

Until one day he decided to enter the house of his neighbor in secret, discovered two boxes talking alone.

The old man tells him the secret and that’s when the child begins toget along with him.

Shiva’s Tears
My favorite book is ” Shiva’s Tears” because the history is about a child who goes to the house of his uncle and aunt during his summer holidays because his father is ill.

He gets to know his cousins better and along with one of them he discovers something about his uncle’s family.

It is an incredible summer for him and at the end he has a romance with the above mentioned cousin.

My favorite book is Matilda, a book written by Roald Dahl, which was published in 1988 in London by Jonathan Cape. It is about a girl who lives with a foster family who abuse her and do not give her affection.

The girl goes to a school where a teacher is rude to children. But in that school she meets a very good teacher that is great. Professor and girl are slowly holding his affection and speding more time together.

As they spend more time together, they realize they have much in common. At the end, Matilda’s parents are leaving the city because of problems with the law and they let her in custody of the teacher. Matilda is very happy.

My favorite book is Twilight. Twilight is a book about vampires and the love between a vampire and a human. It is a book which belongs to a saga written by Stephenie Meyer.

The books of this saga are: Twilight, New Moon, Eclipse and Dawn.

Twilight is a very good and interesting book I recommend it to all, it is a book that hooks easily and you cannot stop reading.

This book has 269 pages and tells the story of treasure island. This book tells a story of a boy named Jim Hawkins who finds a map of a desert island in which there is a hidden treasure. He has the audacity, the help of captain Smallet and the intelligence of Dr. Livesey. John Silver, the pirate, wants to take his map and keeps it to find the treasure. Jim Hawkins finds the treasure and marries the woman of his dreams.

The Boy In The Striped Pyjamas

This book tells the story of Bruno, a German boy of 9 years at the time of Hitler. His family consists of his mother, his father who is a soldier of Hitler and his older sister Gretel. Due to the work of his father, the family must leave their beautiful and spacious house in Berlin and move to Auchwiz in a small house of 2 floors. Bruno refuses because it has a comfortable life in Berlin. As a child, has the ability to be curious and that leads him to explore the surroundings of his new home.
What he finds is a fence, a large fence and behind it, a child. Curious, he walks over and begins to ask. The boy is called Shmuel, is 9 years old and Jewish. From that point, they become friends.

Gradually Shmuel tells Bruno his sad life, how many people lived and how they were moved there. Bruno sees how comfortable and easy his life is.

After a year, Bruno goes to the other side where his best friend is .

The cause was leaving, as he was leaving to go to Berlin again. However, it starts to rain and a lot of people, young children and adults, are put into a big chamber room. Bruno does not know what is happening and sees a huge mess but the kids are together.
His mother and Gretel returnes to Berlin after failing to find Bruno. His father, becomes apathetic and thinks only of his missing son until he realizes what could have happened and will never be forgiven, because as a soldier might say that Hitler killed his own son.

This book is very simple. I read it in 2 days, is easy and nice with a beautiful ending. As you can investigate, Bruno & Shmuel die in the gas chamber. It’s hard to believe that a child of that era has not seen everything that happened, but considering that was rich and his father was under the command of Adolf Hitler everything becomes a little clearer.

The book is delighted and very touched.

THREE METERS ABOVE THE SKY

These two fall in love but this love has many obstacles that are separating them.

This book is not the only one, because there is a second book. 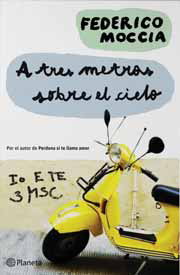 I like this book because it is about the women in war in Colombian.The book was written by a woman.

Women help colombia to get peace but women are discriminated and they are silenced.Many people have sought the information about Colombian women.Women are of great importance in the rise of conflict in the “guerrilla”.

The women feel repressed by the men. It is a History book. This a nice book i would recommend.

THE LION,THE WITCH ANDE THE WARDROBE

When four children discover a wardobe that is used as a door to getting access to Narnia, a frozen country in a eternal winter and without Christmas.

Then the children, along with the lion Aslan will be in charge of setting Narnia free from the White Witch.

I think it is an interesting book and “short” and appropiate for our age. It is and adventure book.I like it.

This book is about a man who has an accident and when he wakes up after being unconscious for several day he doesn’t remember who he was or what has happened.
When he looks in his belongings he sees that he has to get on a train for a mission to try to have an accident on the train, but avoid cheating those who sent him and a girl .
Little by little, he finds out things and discovers that the accident was that the had wanted to kill and be able to save all the passengers on the train, but they eventually stopped him. by: Fernando Lalana.

Harry Potter and the Sorcerer’s Stone

Harry Potter was a child with a special scar on his forehead.He is an orphan and lives with his aun and uncle.

Hagrid takes Harry to Hogwarts when Harry is 11 years old.

In Hogwarts Harry meets Ron and Hermione. They are his best friends.

Harry and his friends attend classes for several years.

Voldemort is a powerful and evil wizard who is defeated by Harry Potter.

6 Responses to My Favourite Book